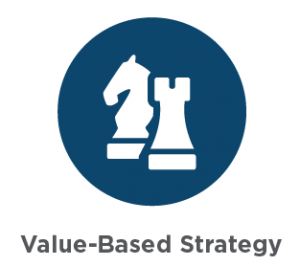 Value-based strategy development and execution are often complex endeavors for operating fee-for-service organizations. Through the development of a clinically integrated network (CIN) or an accountable care organization (ACO), health system staff can begin the journey to developing incentive-based payment structures, and, ultimately, accepting premium risk. Our advisers have broad and deep expertise in supporting organizations that are beginning, as well as optimizing, value-based care, including:

A medical center in the Pacific Northwest had a new CEO who had come from another state where payment-for-value products were prevalent. He wanted to develop a closer relationship with community physicians around quality-improvement initiatives.

At the time, health insurance exchanges were being developed across the country in response to the Affordable Care Act (ACA) becoming law, and Blue Cross (BC) wanted to put a product called ConnectedCare on the exchange. The medical center CEO wanted his facility to participate, but they could not do so without developing a physician network that passed regulatory muster. The medical center decided to create a clinically integrated network (CIN).

The medical center’s leadership selected a group of local physician leaders who represented a spectrum of constituencies and invited them to participate in a steering committee. We educated these physicians about the principles of clinical integration via a series of meetings, and we also identified a primary care physician who was willing to be the first board chair. We created a board out of the steering committee members.

We selected the name, filed the appropriate forms with the state, adopted a charter, formed subcommittees, and created a participation agreement for providers. An interim executive director and interim medical director were also identified. The medical center endowed the organization with its operational capital.

We, along with the executive director, met with many physicians in the community, visiting them in their offices to educate them and persuade them to join. Initially, we were met with a great deal of skepticism—and sometimes even hostility—but more providers signed up. Peer pressure accelerated the recruitment process. We held several town hall meetings to clarify our intent and recruit more providers.

Once the network had an adequate number of physicians, we concluded negotiations with BC to participate as network providers. The medical center decided to further leverage its investment in governance, analytics, and care-management infrastructure by enrolling its own self-insured employees in a tiered product and agreeing to share savings with providers.

Over time, most of the physicians in the community signed on as members and selected quality metrics, as well as the means to track them electronically. Quality-improvement initiatives and care-management efforts began to change the way care was delivered. The value proposition became apparent, and more payers’ interest grew. As a result, there are numerous anecdotes from patients who have been helped by this coordinated care.

The network created shared savings during each of the three years as the medical center’s preferred provider network, saving the hospital money as a return on its investment and providing a bonus distribution to involved physicians and advanced practice providers (APPs). The network received a substantial surplus on its product for 2017, which is unprecedented for a primarily individual exchange-based plan.

The network negotiated with BC, so all providers would remain in the top two of three available fee schedules within their fee-for-service contracts, recognizing BC’s decision to categorize all its physicians (using Truven analytics) as high-, middle- and low-cost providers, and they adjusted base rates accordingly. This also demonstrated to once-skeptical providers the benefits of being part of an organized system of care.

Today, the network serves United Healthcare, PacificSource, and BC Medicare Advantage plans. Blue Cross has also engaged the network to manage commercial PPO members through a value-based arrangement, and PacificSource is also developing a commercial product that will use the network in a supporting capacity. The network turned down a proposed “Medical Neighborhood” product after having a less-than-ideal experience under a past total-cost-of-care arrangement with the payer, recognizing that efforts should be focused on meaningful and collaborative partnerships. Having developed infrastructure and experience, the network entered Medicare’s Track 1 ACO in January 2018.